The Importance of Choosing the Right Detector

Taking advantage of the latest beamline technology requires the optimum detector for each piece of research, which means choosing between counting and integrating detectors. Matching detector type to experiment produces the best results and optimizes the chances for success.

Theoretically, using a counting detector enables each interaction to be captured. However, photon counting does take time. After a photon strike, there is some amount of dead time while the charge produced from the x-ray is moving through the detector.

In contrast, an integrating detector collects photons for an adjustable period of time. As photons arrive and strike the silicon, they generate charge, which is then periodically read out by circuitry. While integrating detectors do not directly count individual photons, that information can be derived from the data.

Given the brighter beamlines being integrated at facilities worldwide, researchers will need to accommodate higher fluxes at the detector. More photons may make an integrating detector the right choice because it offers a way to avoid saturation from brighter sources while still being able to “count” photons in image data.

The ability to compare the two detector types with common measurement nomenclature is also critical. For instance, because many detectors on beamlines are count-based, a count rate equivalent provides a way to compare integrating detectors with counting ones. So the equivalent count rate is how many photons can be integrated over a second without detector saturation. In the case of Sydor’s MM-PAD, this is 5×108 photons per pixel per second, when using 8 KeV photons.

Making the right detector selection requires knowing the beamline and sample characteristics as well as detector basics. If you’re ready to discuss which detectors will support your research, contact Rob Littlewood, PhD at rob.littlewood@sydortechnologies.com to start the conversation. 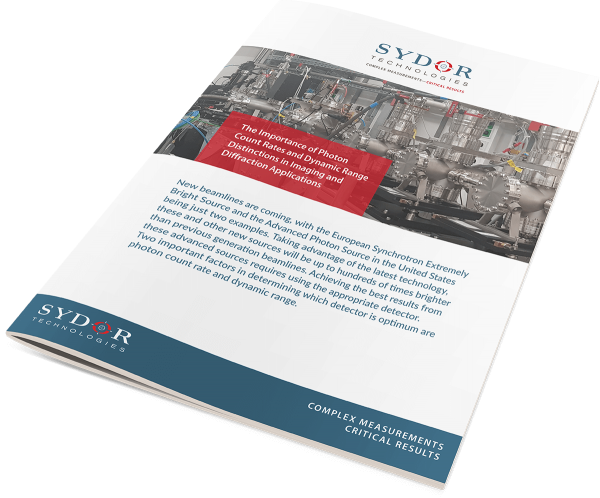 Contact us to get started on your project today!